For the third year in a row, the Turkish Mint has produced more gold coins than the U.S. Mint. 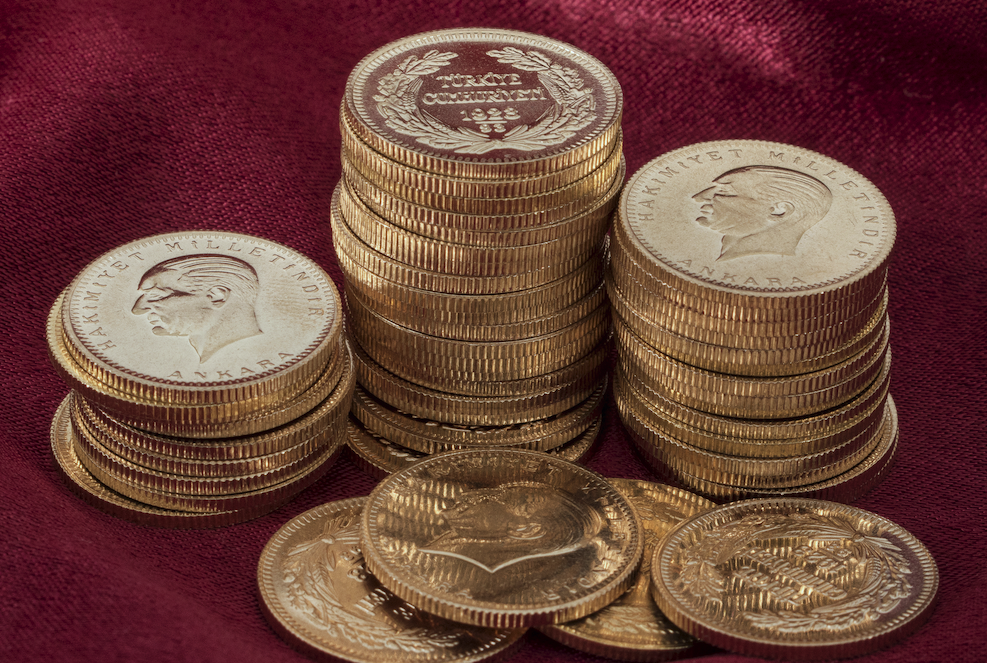 In the international English-speaking gold community, the U.S. Mint is often regarded as the largest mint globally in terms of gold coins produced (measured by weight). Western media regularly report on U.S. Mint production numbers as if they serve as a proxy for gold sentiment in general, which is a false analysis. In 2019, for example, the U.S. dollar gold price was up 18.9 %, while the U.S. Mint’s annual production was lower than in the previous 17 years.

Hardly ever is the Turkish Mint mentioned. One, because Western media tend to be very U.S. centric. Two, the Turkish Mint exports few coins to the West. If you look around on websites of Western coin dealers, seldom will you find a product minted in Turkey. Western dealers mostly sell coins produced by the U.S. Mint, South African Mint, Chinese Mint, Canadian Mint, Austrian Mint, and Australian (Perth) Mint. Coins from the Turkish Mint and Iranian Mint aren’t popular in the West, though these fabricators are among the largest globally.

Considering the U.S. Mint exports its coins the world over, while the Turkish Mint does not but produces more coins, highlights the magnitude of Turkish coin production. The enormous difference in Gross Domestic Product (GDP) of both countries puts their production data truly in perspective. U.S. GDP accounts for more than $20 trillion dollars, while Turkey’s GDP is less than $800 billion dollars. In conclusion, the U.S. economy is 26 times larger than the Turkish economy. Still, the Turks produce five times more gold coins (which are mostly purchased locally).

The Perth Mint in Australia sold 12 tonnes in gold coins in 2019 (down 3% y/y). Production data by other mints has yet to be published.

In Turkey Gold Coins Function as a Parallel Currency

It’s not that coin sales in any country are the primary drivers of the global gold price. But by examining the Turkish coin market we see more evidence for the deeply rooted differences in gold cultures between East and West.

In many countries in the East gold continues to be part of everyday life. In Iran gold coins are still used for large payments, such as rent. In India gold jewelry and ornaments are used as gifts at weddings or childbirths. Gold is deeply embedded in the Turkish culture too. Coinage was invented around 600 B.C. in Lydia (now Turkey), then a province of the Achaemenid Persian Empire. Just like the people in Iran and India, the people in Turkey still have a strong tradition of saving in physical gold. In Turkey, the products made by the mint serve as a parallel currency.

All coins produced by the Turkish Mint are 22 carat (an old measure from the Middle-East still used for jewelry), which equals 916 parts per 1000 fine. Historically this has been the most common fineness for gold coins used as currency. Adding copper or other metals to gold hardens it and increases durability.

Coin production at “Darphane” (the Turkish National Mint) is done on-demand, when bullion with a fineness of no less than 995 parts per 1000, weighing at least 1 kilogram, is offered for manufacturing. The Turkish Mint produces two types of products, each in five sizes ranging from 1.8 grams to 36.1 grams. There is “republic jewelry gold” and “republic gold coins” (click here for an overview, hat tip Asli Sahin). The former can be best described as medallions, and the latter as coins. On the website of local coin dealer Gökçe Koleksiyon the different uses for the two products are explained.

On the website Gold Bars World Wide we can read:

For many in Turkey, there is a social obligation for family and friends to provide gold coins on important occasions. For example, coins are often given at the time of a couple’s engagement, marriage, birth, male circumcision, graduation and conscription into the military.

Remarkably, in 2019 Darphane mostly produced the smallest 1.8 gram, followed by the 7 gram medallion in “republic jewelry gold” (ziynet). For “republic gold coins”, mostly the 7.2 gram coin was produced (meskûk). This confirms the currency element of the Turkish Mint’s products. Gold is an expensive precious metal, but small amounts (1.8 gram, 3.6 gram, and 7 gram “republic jewelry gold”) can be used as gifts for weddings. Small denominations of 7.2 grams in “republic gold coins” can be used for savings and payments.

One would expect a high premium on the gold content of the small Turkish coins. But the premiums are remarkably thin. The most popular meskûk has a gross weight of 7.2 gram, and its fine content is 6.61 gram. The production cost at Darphane is paid in gold, and is only 1%. For 1 Kg fine gold one is required to pay Darphane 9.43 gram, to receive 149 coins. (Though, in the free market the premiums widely differ.)

The minting costs, for most coin sizes, are paid in gold. Darphane retainins a part of each gold kilobar delivered by the entity ordering manufacturing. Hereby, it recognizes that gold is money.

Although Turkish coin production has been impressive in recent years, the rising gold price in Turkish Lira has dampened coin off-take. This fits the long-term Eastern mentality regarding gold: buy low.

In the first chart, you can see coin production spiked in 2013 when the gold price declined globally.

Another reason to put a spotlight on the Turkish gold market is its gold banking system introduced in 2011. In this system, the Turkish central bank allows Turkish commercial banks to use gold as an eligible reserve (requirement) asset. (I will discuss this form of “gold QE” in a future article.) It could be a system that will be rolled out in more countries.

Unconventional monetary policy in, for example the U.S. and Eurozone, is becoming increasingly ineffective. At some point, things will change. While it’s hard to say in what direction central banks will move, it’s valuable to be aware of all options.